These photos all relate to the epic story of the Carlisle Indian School and its history-making football teams, which we tell in our American Football episode. And check out this related post, a collection of student "Before and After" photos.

In 1893, three dozen students made their way to the Superintendent's office at the Carlisle Indian School in Pennsylvania. Colonel Richard Henry Pratt, the Superintendent and founder of the school, had banned the new-ish, brutal game of football after a student broke his leg playing it. But the boys wanted it back. They made such a strong case, that Pratt relented. And in just a few short years, Carlisle was making headlines, winning games, and becoming one of the favorite teams in the country.

Carlisle's 1894 team, just one year after Pratt allowed the resumption of football. They look so young! Check out the "nose armor" hanging around the necks of several players on the left: 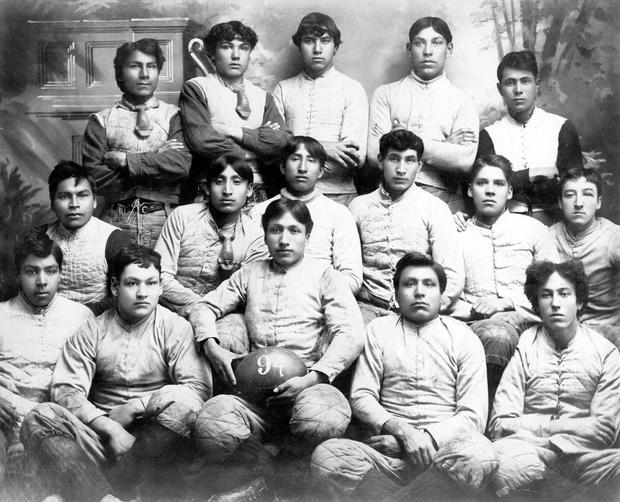 Group photo of 1894 football team at Carlisle Indian School
(Cumberland County Historical Society, Carlisle, PA (may not be used or copied without permission from the CCHS))

In the middle row are Delos Lone Wolf (second from left) and Ben American Horse (third from left). Delos was the adopted son and nephew of the Kiowa leader Lone Wolf, who lost a landmark Supreme Court battle in Lone Wolf v. Hitchcock. Delos helped his uncle on his trips to Washington, DC -- going from a symbolic struggle for territory on the football field, to the very real fight to restore the lands that had been taken from the Kiowa. Ben American Horse was the son of the Sioux Chief American Horse, who after traveling to DC and seeing people "like ants" was one of the first American Indian leaders to send his children to Carlisle.

In 1896, just three seasons after football was reinstated at Carlisle, the school went up against Yale (the most powerful team in the country) in front of a massive audience (one newspaper at the time put the number at 10,000 spectators) at the Polo Grounds in NYC. Carlisle was expected to lose, but almost tied... a bad call by a ref cancelled their final touchdown: 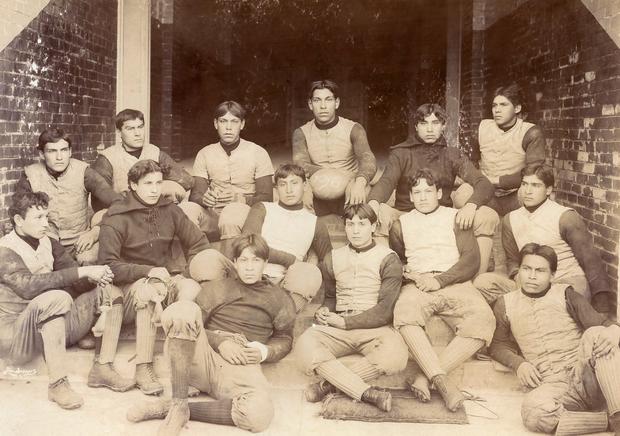 Group photo of 14 members of 1896 football team at Carlisle Indian School
(Cumberland County Historical Society, Carlisle, PA (may not be used or copied without permission from the CCHS))

In both the 1894 and 1896 photos, you can see how round the ball still is -- a far cry from the missile-like spheroid of today.

Here's the 1903 team that pulled off the famous hidden-ball trick against Harvard. Charles Dillion (top row, second from left) wore a specially-sewn jersey with extra room in the back and elastic band around the bottom. Jimmie Johnson (front row, holding the ball) secretly stuffed the football in the back of Dillon's sweater after a kickoff... allowing him to run downfield as Harvard scrambled to figure out where the ball went. (Albert Exendine, one of the heroes of our Carlisle story, is also in this shot -- middle row, second from the right. And that's Coach Warner in the back right, wearing a tie.) 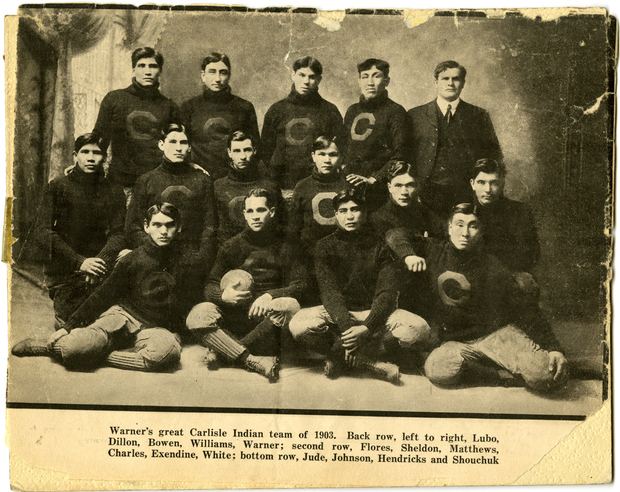 One of early football's infamous formations, the "flying wedge," was built for sheer brute force. Players formed a point (holding onto each other for reinforcement) and rammed forward aiming to crash through the opposing side: 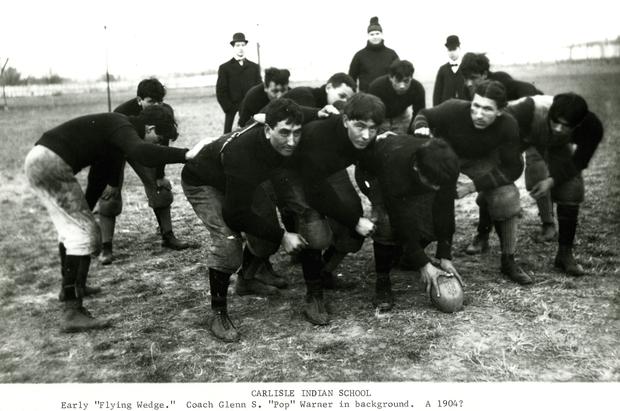 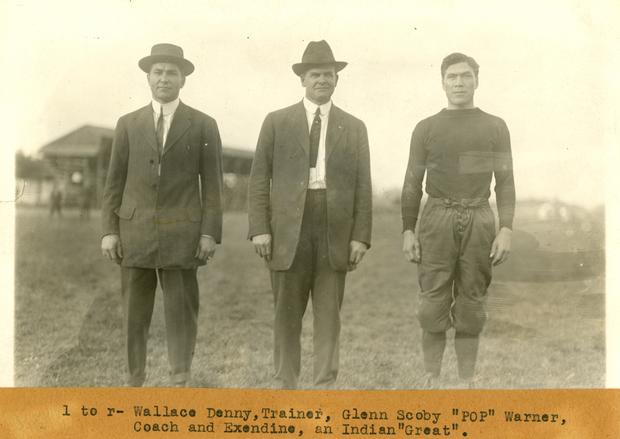 A crush-worthy portrait of Albert Exendine, one of the game's greatest receivers. After Carlisle, he become a lawyer and coach: 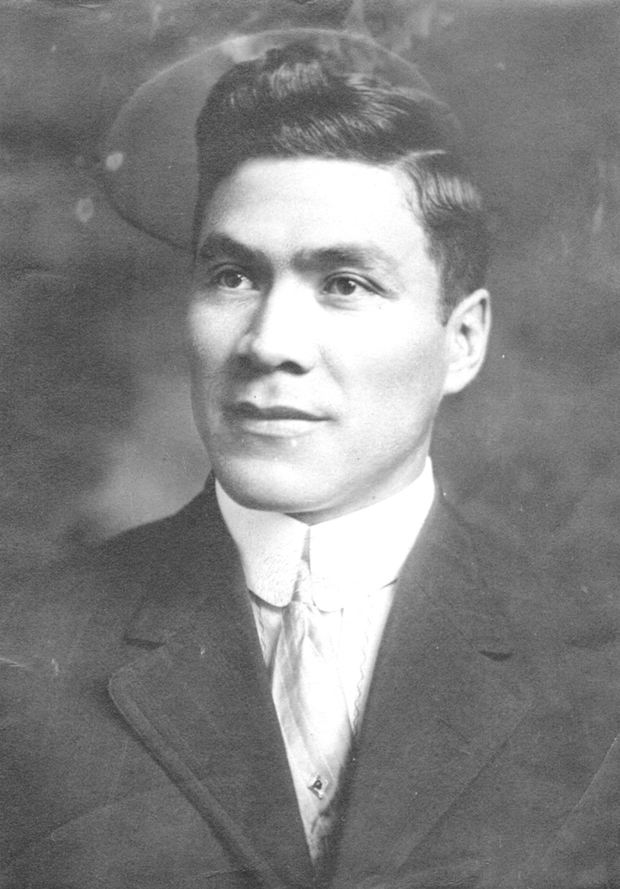 Portrait of Albert Exendine
(Cumberland County Historical Society, Carlisle, PA (may not be used or copied without permission from the CCHS))

A panoramic shot of the big game we describe against the University of Chicago in 1907 -- the stands were packed with 27,000 people:

Here's a gorgeous, eye-crossing (for me at least), game diagram from the November 24th, 1907 edition of the Chicago Tribune (along with some great articles covering the game... scroll down for another great panoramic shot of the crowd and field):

The Chicago History Museum has what maybe is a photo of the out-of-bounds touchdown Exendine makes against the University of Chicago.

Fullback Pete Hauser in uniform. Hauser threw a massive 40-yard spiral to Exendine (who ran out of bounds, around spectators and players, and back on the field for the catch...) in the 1907 University of Chicago game: 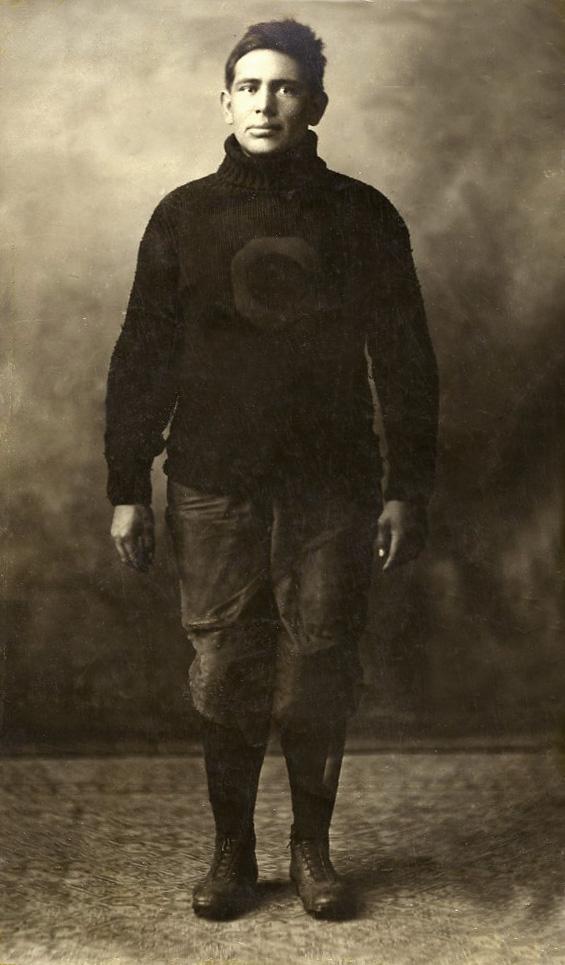 Peter Hauser, fullback, in football uniform.
(Cumberland County Historical Society, Carlisle, PA (may not be used or copied without permission from the CCHS))

I love this photo -- a big sprawling shot of the full 1907 squad. Pop Warner is in the back left corner in a Carlisle sweater. Frank Mt. Pleasant is in the front center (with his hands clasped on his knee). Albert Exendine is sitting next to him on the right. A young Jim Thorpe sits in the 2nd row, 2nd from left. 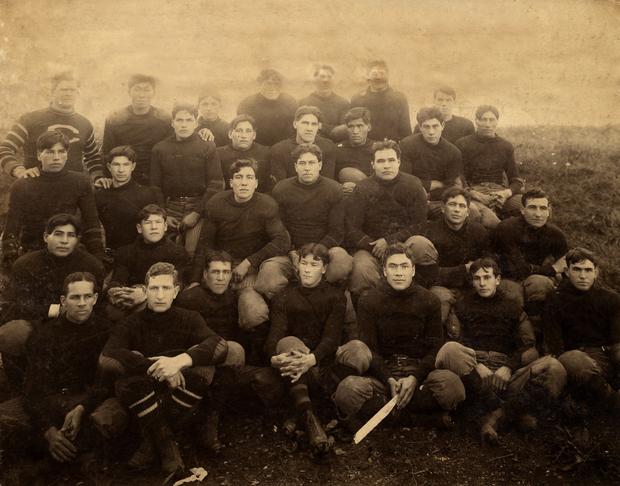 Frank Mt. Pleasant in football uniform
(Cumberland County Historical Society, Carlisle, PA (may not be used or copied without permission from the CCHS))

Other teams and coaches -- like St. Louis University under Eddie Cochems -- were also experimenting with forward passes and spiraling the ball in 1906.

In 1951, Warner wrote a letter in which he said "I do not think anyone can lay claim to having first used the spiral punt or the spiral forward pass. The forward pass was legalized in 1906 and I remember very well that Frank Mt. Pleasant of Carlisle used many spiral passes to defeat the Univ. of Pennsylvania 26 to 6 in 1907. He was also kicking spiral punts that year."

In 1912, Pop Warner wrote a coaching manual in which there are three photos of Frank Mt Pleasant demonstrating how to throw a spiral (check out pages 35-37): 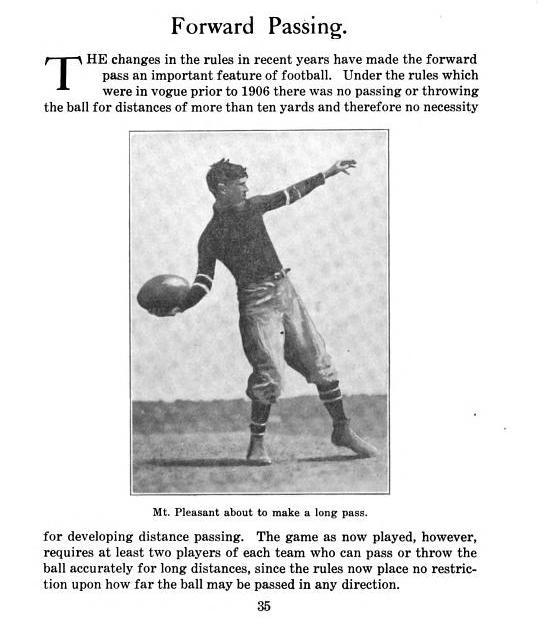 In 1908, Pop Warner had football-shaped leather patches sewn onto the front of Carlisle's jerseys. When they wore them against Syracuse in 1908, it created the illusion of a field full of ball carriers. When Carlisle tried to use the sweaters against Harvard later in the season, they countered with crimson-painted game balls which would be invisible against Harvard's crimson jerseys. 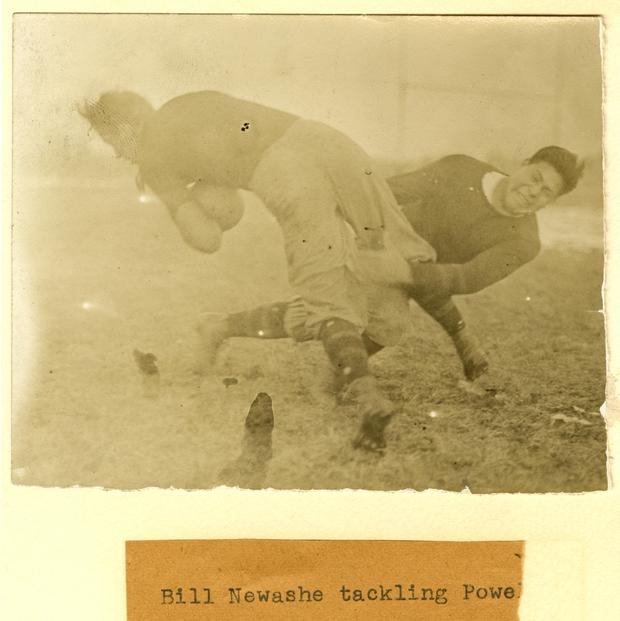 Jim Thorpe, one of the greatest athletes of all time, famously dominated track meets and football games during his time at Carlisle. Here he is attacking one of Pop Warner's tackling dummies in 1912: 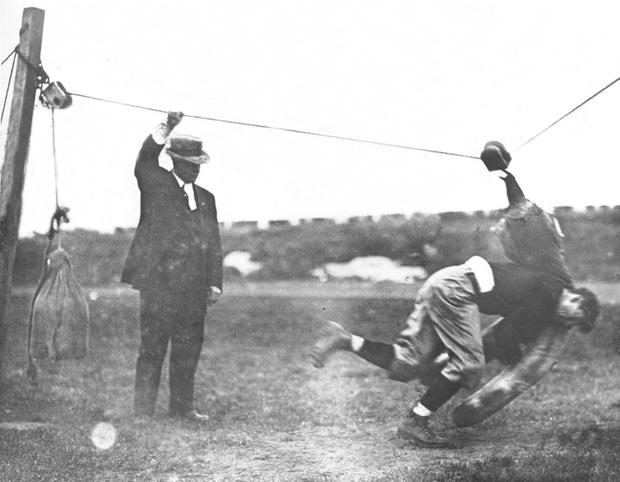 Jim Thorpe attacking an improvised tackling dummy made of weights and pulley on wire, with Coach Warner looking on, c. 1912.
(Cumberland County Historical Society, Carlisle, PA (may not be used or copied without permission from the CCHS))

Carlisle's band was a huge, national sensation too. Band Master Dennison Wheelock -- in the upper left -- made a powerful speech about the role of football at an 1897 athletic banquet in which he said:

Today, the Indian is beyond the Mississippi. The only way I see how he may reoccupy the lands that once were his, is through football, and as football takes brains, takes energy, proves whether civilization can be understood by the Indian or not, we are willing to perpetuate it. 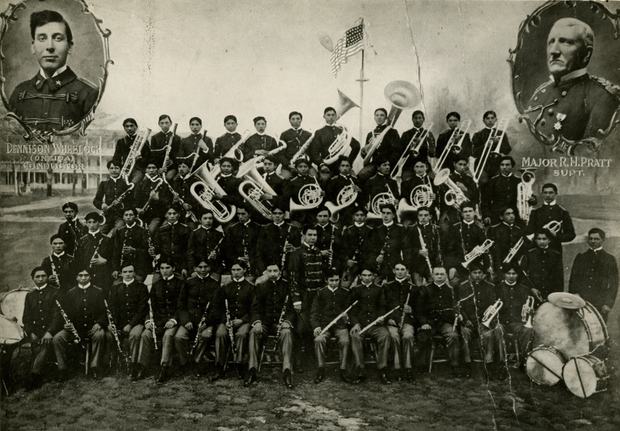